On April 15, 1947 Jackie Robinson played his first Major League game. He started at first base and batted second in the lineup. He scored the winning run that day, but that was only a sheen on what he’d truly achieved; what was being achieved through this 28-year-old man.

Robinson was the first black player permitted to play in the modern Major Leagues.

That was only 70 year ago. Many who were there still live to tell about it.

I really love sports. And I’m always interrogating myself as to what that means—whether it’s a good thing or bad. Sports is really only entertainment, yet it occupies a special cultural space in societies far and wide. It can be an amniocentesis of culture and of the composition of societal values. In this regard, it must be seen as far more than mere entertainment.

The ancient Olympics between Greek city-states exhibited their cultural values of fitness and a veneration of the body. Truces between warring Greek city-states were observed in light of the importance of these quadrennial events!

Gladiatorial combat in first century Rome, signaled a preoccupation with war and sensational violence; a violent diversion for the masses, evoking bygone eras of valiant Roman conquest and might!

In our country, sporting events are intertwined with patriotism like no other (non-military) institution. Think of that last 10 times you covered your heart and sang the national anthem? At least 80% sporting events, right?

Of course this has a way of beckoning us to muse about the state of our country, doesn’t it? Flags are waving. Planes flying overhead. Hats off. Hands on chests. There could hardly be anything more sacred or worshipful. (Sometimes you get the bonus of “God Bless America” thrown in!) Does it all feel right, or discordant?

(These inquires are, by the way, the most patriotic of ruminations, despite what is so often wrongly inferred otherwise. Our military, as well as citizens and civil servants of every variety, give valiantly to preserve a nation which embodies both liberty and justice. Scolding those insisting that our nation live up to these ideals is itself contempt for their mortal sacrifices, and very unpatriotic to boot! I won’t be persuaded to the contrary!)

Now you may fancy all this patriotic pageantry at the stadium to be window-dressing on an otherwise shallow affair (they do, after all, eventually shoot hotdogs at you with air-cannons). It may be a matter of course. Or maybe you consider it a sobering reminder: that our nation is a unique place in which one can enjoy freedom to take in something so pleasurable.

But thrust we are into such patriotic waters whenever we enter the world of sport.

And so it was, in the middle of the previous century, that race was, at long last, found to intermingle with our patriotic fervor on that most peculiarly consecrated field of our national pastime.

Joe “the Brown Bomber” Lewis was the juggernaut heavyweight champion of the world.

But these were blips, not the quotidian American summertime texture of baseball.

Robinson lettered in 4 varsity sports at UCLA (football, basketball, track and the obvious), but had to leave school for financial reasons. He briefly played semi-professional football in Hawai’i, before joining the Army during World War II.

He never saw the foreign combat field, but did experience a more domestic variety when he was arrested and court-martialed in 1944 for refusing to go to the back of a segregated bus. (This was 11 years before Rosa Parks.)

Because of his impeccable record of service and reputation, he received an honorable discharge. He began playing baseball in the Negro Leagues (for the Kansas City Monarchs), before being approached by Brooklyn Dodgers’ GM Branch Rickey.

Robinson’s Major League career lasted 10 seasons. He was a great player—a true star, in his own right. He was a career .300 batter and helped lead the Dodgers to a World Series win over the Yankees in his final season.

But the singularity of Robinson’s life was to be that stalwart extension of the black community; and the baseball diamond was to refract a spectrum of hopes for justice in his very presence.

Sports reporter Ed Silverman spectated this all. He recalls the sections of black fans in the stadiums during those days:

The women were all well coifed. Many wore lovely dresses and light coats. The men were all nicely attired. It was more like going to church than to a ballgame.

Like going to church indeed! Because justice is sacred, and what happening was understood to be holy ground by the black community.

Silverman’s black colleague in the press section helped filled him in,

…black clergymen had been talking to their congregations, telling them, “This is a very critical time for us, because not only is Jackie Robinson being judged, we’re all being judged by how we behave at the ballpark. So we’re asking you, please contain yourselves, act like ladies and gentlemen, wear proper attire, please do not drink or make any derogatory remarks. As Jackie goes, we all go. We’re all going to rise or fall together.”

This both grieves and inspires me; solidarity toward something fragile, which never should have been such a fragile thing. Yet it was. Did you know this was how the black community was standing with Robinson?

Of course, on-and-off the field Robinson’s mettle was put to the test. To say this was only about the entertainment of sport is to turn blindly from the epic clash that took place in this man’s life and career. It was a clash between good and evil.

Though blacks felt beset by the tenuousness (almost probationary) notion that, “We’re all going to rise or fall together.” It was in fact a probationary moment for our nation—probation being a granting of opportunity for proving to those who have heretofore been found wanting.

Around this same time other leagues were being integrated (NFL in ’45, NBA in ’50), but it was baseball that was, as it were, the holy grail.

Baseball, it is said, is only a game. True. And the Grand Canyon is only a hole in Arizona. Not all holes, or games, are created equal.

Herein, Robinson rose indeed, and his community with him. And what of our nation? Did we rise? It should be stated that the rising in question, if achieved, is a rising for all.

Injustice anywhere is a threat to justice everywhere. We are caught in an inescapable network of mutuality, tied in a single garment of destiny. Whatever affects one directly, affects all indirectly.

In part we did, as an invalid rising haltingly from convalescence.

Maybe the real question is, “Are we rising still?” How are we doing, 70 years hence?

Aren’t we very much still in the convalescence of racial equality, even only keeping sports as our focal point?

Tiger Woods won the 1997 Masters (at Augusta National) by 12 strokes, becoming the first black to win the Masters. Only 7 years prior, Augusta National had begun allowing blacks to become members! (That would be 1990.) They also did away with a rule requiring all caddies to be black at that point! 1990.

In August of 2016, Simone Manuel  became the first African-American to win an Olympic medal in swimming for the US. Why was this so long in coming? Because generations of blacks had virtually  no access to swimming pools. (Water being a longstanding forbidden territory for inter-racial mixing.) That’s why!

You can’t get good at something you aren’t allowed to do.

Sports as a platform for dissent has been a mixed bag to say the least.

Who can forget Tommie Smith and John Carlos, leather-gloved fists raised on the medal stand during the 1968 Olympics? For this act of solidarity toward the plight of blacks in the US, they were dismissed from the team, banned from the Olympic village and largely ostracized from the US track and field community.

LeBron James, Kyrie Irving, Kevin Garnet and Derrick Rose received less blow-back when they wore “I Can’t Breathe” shirts in December of 2014, as a response to the police-involved death of Eric Garner in Staten Island.

More recently, people seem not to know what to do with Collin Kaepernick’s refusal to stand during the national anthem. (Something Mahmoud Abdul-Rauf had become a pariah for doing in 1996.)

But can we all agree that we’ve got a long ways to go? As long as we struggle to rise, sports will be an aperture through which our national issue of race faces magnification under its patriotic lens. And that’s a good thing.

It’s a good thing—maybe even inevitable—that while lauding our nation as “the land of the free, and the home of the brave”, we would renew our own sense of privileged responsibility to actively shape it accordingly.

In the Majors, Robinson’s number 42 is forever retired—none will wear it again! Others will accomplish similar baseball feats, but none will have his exceptional legacy. And yet, we all might share in his legacy, and that it truly something.

On this day, 70 years ago, Robinson got his first Major League hit and scored another run in a 12-6 rout of the Boston Braves. His Dodgers improved to 2-0, and our nation improved with them. But it was only his first series, and it was only his first season. On and off the field, his saga was only beginning. There would be wins and losses, good games and bad, health and injury along the way.

I can’t help think we are in the early innings of our true national reckoning with race. What I mean by that is that we are just getting started, and there is a lot of game to be played; every inning counts. The beautiful thing about baseball is that there is no clock, only opportunities seized or forfeited!

Like all important games, certain innings do have a more pivotal feel though. This feels like one of those innings, doesn’t it?

One thought on “Sport as Signal” 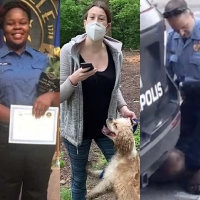