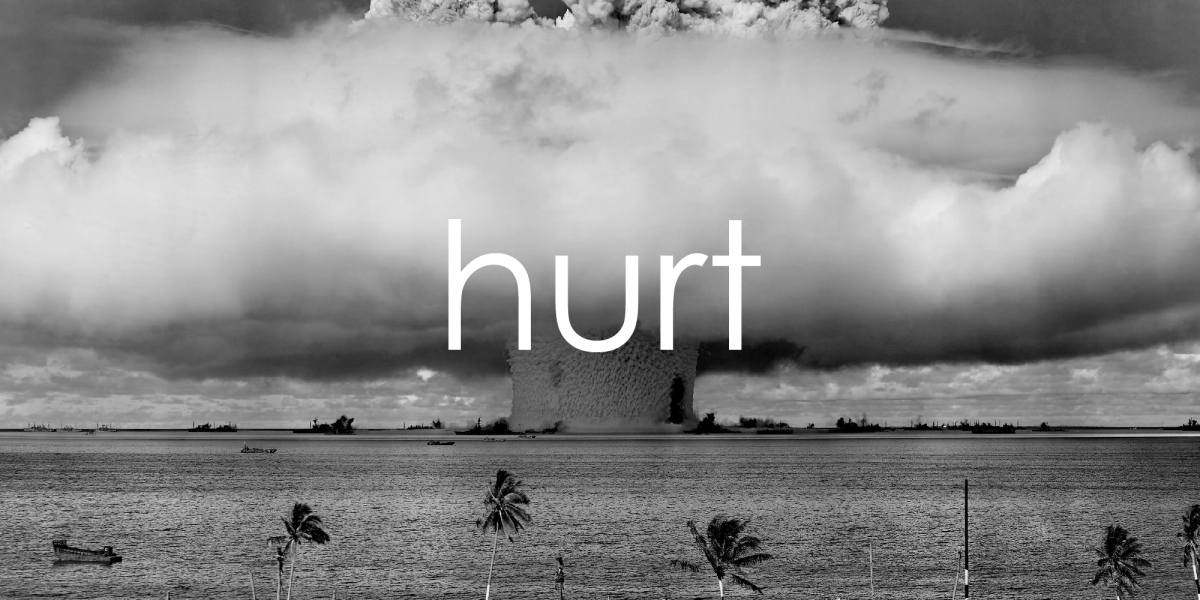 A friend recently went through an awful ordeal; nearly lost a loved one; thought he had. A few days later another friend began to ask him about it, and a tempest of emotions burst out, startling even him. He told me later of the memory of the ordeal, “it was like putting my hand on a hot stove every time it came to mind. It was so painful that I couldn’t bear to even think about it.”

But it was there; was it ever still there!

Another friend wrote a piece awhile back about the loss of his dad, exploring the relationship between anger and hurt,

Being angry, people who know tell me, means dealing with your hurt alone.

That really stood out to me. I think it’s true too.

It makes me grieve for what is becoming a nation of lonely hurters—my nation. I can’t get the sounds out of my head, the thump, thump, thump of gunfire hailing down apocalyptic on a crowd in Las Vegas. Or the shrieking of tires followed by a concussive thud of a car throttled (in both uses of that word) into a crowd on the streets of Charlottesville.

The former, a man returning to the site of unresolved pain; the undiscussed arrest and detainment of his bank-robber father when he was only 7. Whisked swiftly off to California, he wouldn’t learn the truth of his father’s demise until his 20s. The latter, a man whose hurt smoldered in a relative isolation breached mostly by a steady fuel of high octane hatred.

There is an eruptive quality to all of this; something almost atomic, which, of course, is the product of something small but central—nuclear—being fractured. And so it is that humans might behave like bombs, or is it the other way around?

I often walk by the spot where Enrico Fermi achieved the first controlled nuclear chain reaction in his makeshift lab-cum-squash-court underneath the Stagg Football stadium at the University of Chicago in the mid-40s. As Fermi was ushering in the Atomic Era, another cataclysm was taking shape nearby.

Mildred Williams was a student at Northwestern, and was engaged to be married to her college boyfriend—away at war. But she was cheating on him. When he returned, they were married, and she admitted the infidelity to her husband just before their wedding. He would later bereave, “I had literally saved myself for her.” This devastated newlywed was named Hugh Hefner. He would describe this admission as “the most devastating moment in my life.” Hefner died this week at the age of 91, having built a tragic personal empire upon the degradation of women and an exploitative commodification of sex, having radioactively toxified the entire global community. And why? Not a few have traced his pathology back to the moment of mortifying hurt he suffered on the eve of marriage.

In the human nucleus lives an energy unimaginable in scope, and its wholeness—shalom—will decide its chain reaction.

Hurt takes many forms: humiliation, shame, loss, abuse, trauma, abandonment. But in all its iterations it is known to fissure us at a deep and volatile level of self.

We have a well-publicized opioid epidemic in our nation, which policy makers, medical professionals and a holy host of others are scrambling to address. Scores craving relief. But the salient question is, “Why are people in such pain?”

Karl Marx famously wrote, “religion is the opiate of the masses.” But I question this use of the definite article. The opiates of the masses are limitless! Even Hefner’s empire itself was largely conjured from this voracity; the relief and release from pain.

The song probes the distraught pursuit of resolving hurt felt and hurt caused, before cascading into lamentation over one’s very existence,

But we must face hurt. We must touch the hot stove. And we must help one another be brave enough to do so.

I’ve quoted M. Scott Peck before, but this is very much the premise of his landmark book The Road Less Traveled,

What makes life difficult is that the process of confronting and solving problems is a painful one. Problems, depending upon their nature, evoke in us frustration or grief or sadness or loneliness or guilt or regret or anger or fear or anxiety or anguish or despair. These are uncomfortable feelings, often very uncomfortable, often as painful as any kind of physical pain, sometimes equaling the very worst kind of physical pain. Indeed, it is because of the pain that events or conflicts engender in us all that we call them problems. And since life poses an endless series of problems, life is always difficult and is full of pain as well as joy.

Most of us are not so wise. Fearing the pain involved, almost all of us, to a greater of lesser degree, attempt to avoid problems. We procrastinate, hoping they will go away. We ignore them, forget them, pretend they do not exist. We even take drugs to assist us in ignoring them, so that by deadening ourselves to the pain we can forget the problems that cause the pain. We attempt to skirt around problems rather than meet them head on. We attempt to get out of them rather than suffer through them.

This tendency to avoid problems and the emotional suffering inherent in them is the primary basis of all human mental illness … Some of us will go to quite extraordinary lengths to avoid our problems and the suffering they cause, proceeding far afield from all that is clearly good and sensible in order to try to find an easy way.

The Dread Pirate Roberts summed this up,

Life is pain, highness. Anyone who says differently is selling something.

I am certain that these fissures of hurt at the human nucleus represent the unleashing of latent and indescribable energies.

And I am certain that this involves a courageous movement into its fearsome power.

And, more than ever, I believe we must be heroic in our willingness to move into the hurt of others.

Our society is populated with hurting hurters. We are trapped in tragic cycles of causality, which can only be broken when we volunteer ourselves to be what Henri Nouwen called, “wounded healers.” The hurt we all carry represents our individual (and collective) capacity for causing hurt, yet our hurt also holds our master key for healing. Healing people heal people.

So each of us must determine for ourselves whether we’ll accept this daunting assignment. No person can accept it for another. But friends, I think we must take up the effort to kindly and creatively move into the pain, hurt and suffering of those around us. We must learn to see hurting people for what they are: hurting people. Just like us. Even when it’s us they’re hurting.

This is no easy thing. God knows! And I mean that in earnest: God knows!