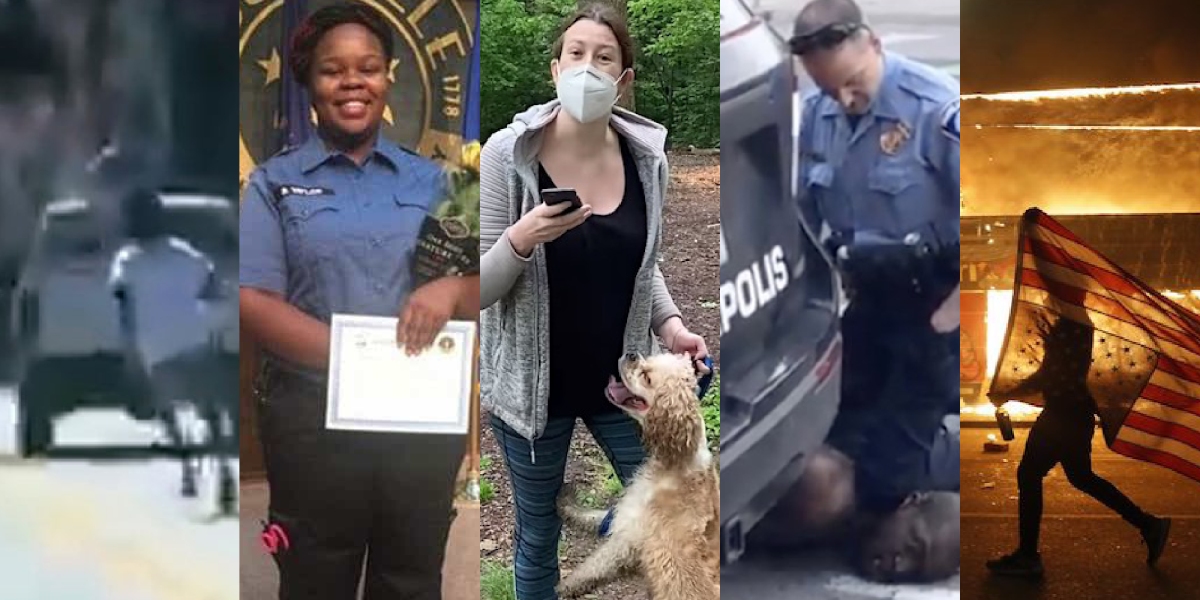 May has been brutal, and I’m tired. I know so many of us are. There are many varieties of tiredness, but the tiredness in my life is that of heaviness and grief.

The psalmist David expressed it thus,

I am worn out from my groaning.
All night long I flood my bed with weeping
and drench my couch with tears.
My eyes grow weak with sorrow;
they fail because of all my foes.

We use the word brutal in a spectrum of ways, and May has encompassed them all. At the beginning of this month we witnessed the devastating footage of Ahmaud Arbery’s February 23 murder, in which this black jogger was hunted down and shot in cold blood by a father and son. More than that, we were dismayed by the realization that months had gone by since the killing with no meaningful response by law enforcement. The gaping chasm of this knowledge bespoke something sinister and unsettling.

And we groaned. We groaned, as for a world unlike this one: we cried out, we ran, we sent letters, and made phone calls. Days later we became aware of the terrible shooting of Breonna Taylor by police in her own home in Louisville, and of the miscarriage of justice surrounding it. Our eyes grew weak with sorrow.

Then, in the span of one day, we observed a confrontation in Central Park, in which an embarrassed white woman appeared to summon a dark force against a conscientious black man who had simply asked her to abide by park guidelines. Later that same day came the appalling footage of George Floyd’s killing by Minneapolis police officer Derek Chauvin, whose fellow officers warded off a crowd of bystanders attempting to intervene. The juxtaposition of these two events seemed undeniable points within a connect-the-dot. I was on a Zoom call that night and, as I began sharing about this, I found myself crying.

We are prone to call these deaths senseless, but what is most troubling is that they seem governed by a sense—the sense of what is commonly called evil. They are not senseless—they make all too much sense. Our strength fails because of foes. We’re reminded of the powers and principalities at work in this dark world, against which we contend. (Eph. 6:12) We were being allowed to see the gears of a system of mechanisms operating with chilling efficacy as from cruel design. And we were shaken. The earth opened up to unleash a flood of heat. The streets began to burn.

So much could (should) be said and done in response to this. And I agree with so many who are reminding us that this not a sprint but a marathon. But I want to speak as a Christian to Christians—especially white Christians—by saying, The Gospel of the Kingdom pertains to each and every part of this. Do not be convinced otherwise.

As John wrote, “The reason the Son of God appeared was to destroy the works of the devil.” (1 Jn 3:8) Family, there are few works of the devil with the enormity of carnage than race, racism and white supremacy. There is a pervasive and intransigent mindset in white evangelical communities that working for justice and equality is somehow “a distraction from the work of the Gospel.” But let us reject that. Any so-called ‘Gospel ministry’ that does not speak and act forcefully against the social evils of racism and white supremacy is unrecognizable from the Gospel and the Kingdom of God we encounter in Scripture.

I would argue this internal reluctance experienced within the white Christian community is itself an essential part of the machinery of darkness, because it derives its energy from fear and not love for God or one’s neighbor.

Until justice is permitted to shape our moral imagination, until this can become robustly integrated into our discipleship and disciple-making, we only remain perplexed and passive—and silent. Meanwhile our world is wondering why the Church so often goes hoarse in these moments—if not tacitly siding with injustice. (As silence always does.) Jesus, who came declaring, “Repent, for the Kingdom of Heaven is at hand,” (Mt 4:17) and exclaiming, “the Kingdom of God is already among you!” (Lk 17:21) has given us a prophetic place in this world—a prophetic identity!

“You are the salt of the earth,” Jesus said. “You are the light of the world!” In losing our saltiness, we void our very identity. In refusing our luminosity, our purpose is forfeited. “Let your light shine before others,” the Savior continued, “that they may see your good deeds and glorify your Father in heaven.” (Mt 5:14-16) Do they see the goodness of our deeds; the moral clarity of our voice?

“The greatest issue facing the world today, with all its heartbreaking needs, is whether those who, by profession or culture, are identified as ‘Christians’ will become disciples – students, apprentices, practitioners – of Jesus Christ, steadily learning from him how to live the life of the Kingdom of the Heavens into every corner of human existence.”

Do we accept this description of discipleship or something less?

What, then, is “the Kingdom of the Heavens”? We are given a tantalizing picture of its culmination in the book of Revelation.

Firstly, it is a populated by “a multitude too large to count, from every nation and tribe and people and language.” (7:9) We are told that this “Great Community” was exactly what Jesus gave his life see realized.

Secondly, “the glory and honor of the nations will be brought into” its capital city. (21:26) That is, all humankind will be represented there, and all will have honor.

As Christians, we often pine for this day … as we must, for this is our hope. Yet it is also our love, and Jesus taught us to pray, “Your Kingdom come, your will be done on earth as it is in heaven.” (Mt 6:10) The governing concern of our life, Jesus insisted, is to “seek first his Kingdom and his righteousness.” (Mt 6:33) That word righteousness can just as easily be translated “justice.”

If and when we are about following Jesus and teaching others to do the same;  learning together as would-be followers “how to obey everything he has commanded,” (Mt 28:20) we cannot exclude our obligation to be justice-bringers in this world—if for no other reason than our common “hunger and thirst” for it!

In his book Bring Forth Justice, Waldron Scott noted, “We are accustomed to discipleship, in part, as ‘separation from all known sin.’ In practice we limit ‘all known sin’ to personal misconduct… We do not take seriously our involvement in structural evil.”

The “old order” is the order of this age, and we must help it pass away as members of the Kingdom. This must become an ongoing and significant aspect of the good fight that is ours to join. It is a fight. A fierce one. The fight is decidedly against an entire order of things—with dark powers and principalities behind it. It is a brutal system to which the brutalities of May attest. Our confession and fidelity to Scripture makes this clear.

Much speculation of late has taken place around how a bystander should handle an occasion of police brutality or racial violence. What would I have done if I was on that Minneapolis street or in that Georgia sub-division? It is a fair, if abstract, thought, and I believe it comes from a deep sense of obligation. Most of us, however, will not be present for something so horrific, yet all of us are present and participatory in a society that has yet to act with anything close to the appropriate urgency deserving its evil animations. In this regard, our opportunity is quite concrete.

Having received the moral imperative to, in Messianic words of Isaiah, “faithfully bring forth justice,” (42:3) we might apply our faith to this assignment from our Lord. We might employ our whole arsenal therewith; speaking and acting, praying and promise-claiming,  all the while keeping in mind, “The weapons we fight with are not the weapons of the world. On the contrary, they have divine power to demolish strongholds.” (2 Cor. 10:5) So we might come against these evils by prayer and fasting and worship … and intentional efforts!

In our fatigue, we can call to mind, “let us not grow weary of doing good, for in due season we will reap, if we do not give up.” (Gal. 6:9) In our discouragement, “my dear brothers and sisters, stand firm. Let nothing move you. Always give yourselves fully to the work of the Lord, because you know that your labor in the Lord is not in vain.” (1 Cor 15:58)

Let us neither forget nor spiritualize the fact that Jesus himself announced his ministry by taking up the scroll of Isaiah:

“He stood up to read, and the scroll of the prophet Isaiah was handed to him. Unrolling it, he found the place where it is written:

‘The Spirit of the Lord is on me,
because he has anointed me
to proclaim good news to the poor.
He has sent me to proclaim freedom for the prisoners
and recovery of sight for the blind,
to set the oppressed free,
to proclaim the year of the Lord’s favor.’

Then he rolled up the scroll, gave it back to the attendant and sat down. The eyes of everyone in the synagogue were fastened on him. He began by saying to them, ‘Today this scripture is fulfilled in your hearing.’” (Lk 6:17-21)

The eyes of many remain fastened upon those who are called by Jesus’ name. In our day will we see this scripture being fulfilled?  Let us hasten the dismantling of old, sad orders through our toil in partnership with the One who says, even now, “Behold, I am making all things new.” (Rev. 21:5)

One thought on “The work of the Gospel” 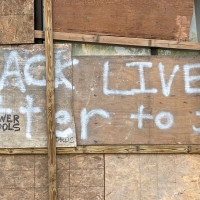 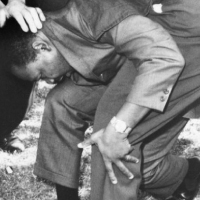